The Indus Valley Civilization: An

ornamented past, revealed in 5,000-year- 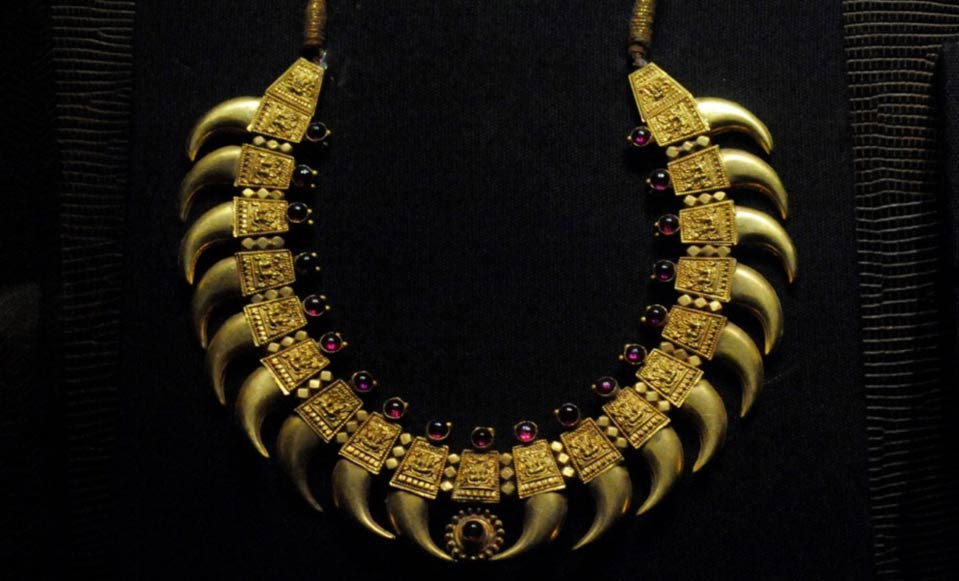 The Indus Valley Civilization was rich with culture and tradition, revealed in its wealth of beautiful, intricate, and elaborate ornaments, jewelry and artifacts. These items and more are on exhibit at India’s Jewellery Gallery of the National Museum in Delhi. According to DNA India, the display represents the high aesthetic sense of the craftsmen of Old World civilization, and the connection between culture then and now through art, jewelry, coins and pottery. The National Museum exhibit is entitled Alamkara – The Beauty of Ornament. The museum describes the nature of the collection and the influence of adornment on humanity, observing, “Once decorated with beautiful ornaments, the body assumes form, becomes visible, attractive and perfect.” “Painstakingly wrought by anonymous goldsmiths in ateliers and workshops across the country, the national museum collection celebrates the great variety of forms, the beauty of Indian design and the genius of Indian craftsmanship,” FirstPost reports. 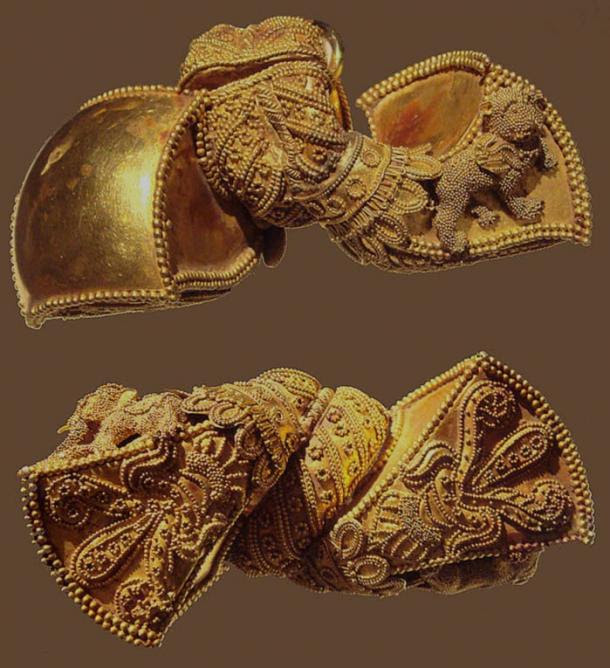 More than 200 ornaments are on display collected from 3,300 BC to the 19th and 20th centuries, including a 5,000 year old necklace, created of steatite and gold beads all capped in gold, with pendants of agate and jade. 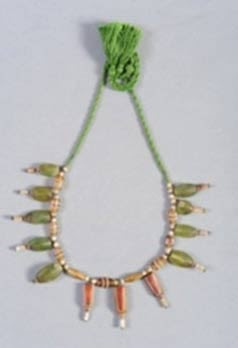 Guest curator and jewelry historian Usha Balakrishna told DNA India, “"India was the largest manufacturer and exporter of beads to the world at that time. […]They had the skill of tumbling beads, of cutting semi-precious hardstones, of shaping the beads. India was also home to the diamond and invented the diamond drill, which was then taught to the Romans." The ancient auspicious image of the swastika can be found on other items featured in the exhibit at the museum. Two square amulets feature lucky swastika symbolism, and Balakrishna says they are "the earliest known representations of swastika in gold known to us.” Other motifs decorating the artifacts are lions, fish, and the 'poorna ghat', known as a vase of plenty in religious ceremonies. The Indus Valley civilization (also called the Harappan era) was one of the earliest known cultures of the Old World, dating from approximately 3,300 to 1,900 BCE, and spanning widely across Afghanistan, Pakistan and India, covering 1.25 million km2 at its height. Wikipedia notes that the engineering skills of the people were “remarkable”, with great achievements in measurement accuracy and craftsmanship. The subcontinent boasts the longest history of jewelry making in the world, stemming back 5,000 years. These first jewelers created gold earrings, necklaces, beads and bangles, and the wares would be used in trade, and worn mostly by females. 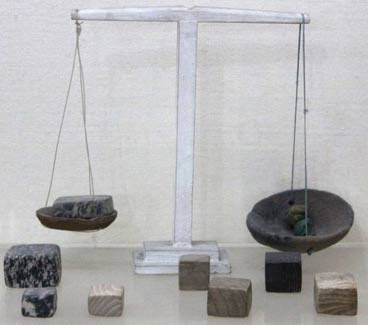 Ancient Harappan weight scales. Wikimedia, CC
Sir John Marshall of the Archaeological Survey of India is to have been shocked at seeing samples of ancient Indus Valley bronze work in the early 1900s: “When I first saw them I found it difficult to believe that they were prehistoric; they seemed to completely upset all established ideas about early art, and culture. Modeling such as this was unknown in the ancient world up to the Hellenistic age of Greece, and I thought, therefore, that some mistake must surely have been made... '' 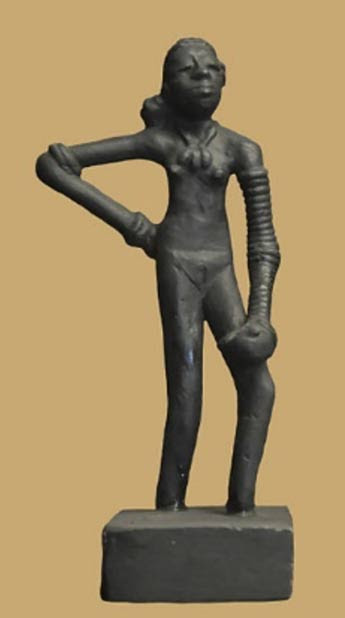 Replica of the prehistoric “Dancing Girl of Mohenjo Daro” circa 2,500 BC, Wikimedia, CC.
The showcasing of the art, skills and craftsmanship of the Indus Valley civilization and their descendants is hoped to help fill in some of the gaps in understanding of the history and rich culture of ancient India. Featured Image: Artifact on display at the National Museum in Delhi featuring jewelry and adornment of the Indus Valley Civilization. Credit: National Museum.
Yog

By Venus Upadhayaya, Epoch Times
Indian archaeologists uncovered a 4,000-year-old copper crown in the village of Chandayan, in the northern Indian state of Uttar Pradesh last week, from what they believe was the late Indus Valley civilization.
According to Dr. Rakesh Tewari, the director general of the Archaeological Survey of India (ASI), this is only the second crown discovered at an Indus Valley site in either India or Pakistan. Earlier, a silver crown was found at another late Indus Valley site in what is now the Fatehabad district of Haryana state in northeast India.
“The person wearing the crown could be an important person of the society,” said Dr. A.K. Pandey, the director of the excavation at Chandayan and a superintending archaeologist at ASI.
Tewari said it was too early to tell if it belonged to a ruler in the region.
“It is not known if in those days, people used it as a crown or just as a head gear,” he said.
The copper crown, decorated with a Carnelian and a Fiance bead [both precious stones], was found on a skull and exposed by laborers while they extracting clay to make bricks in August. Word of the discovery spread around India, and caught the attention of the ASI, which started excavating the site in early December.
“Our objective was to undertake a salvage operation, just to look into what could be found around the site of the skeletal remain,” Tewari said. 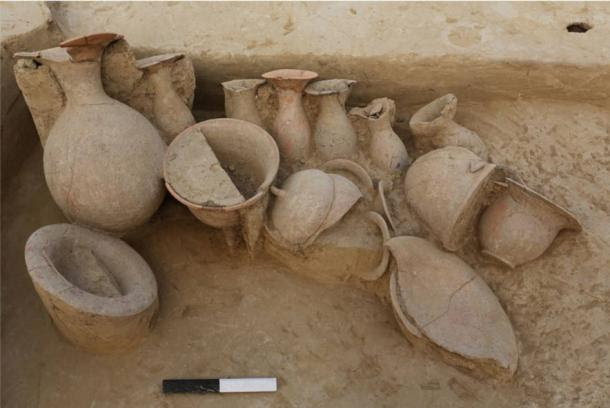 Earthen pots found at a burial site from the late Indus Valley civilization period in the village of Chandayan, in the northern Indian state of Uttar Pradesh. (A.K. Pandey/Archaeological Survey of India)
More Discoveries During excavation, Pandey also found animal bones and mud pots at the same excavation depth as the burial site, but about 65 feet away. This suggests that an animal was sacrificed during a funeral ceremony for the person whose remains were found. “This was a practice in those days,” Pandey said. According to Pandey, another piece of the same crown, a pelvic bone, and femur of the left leg of the person was unearthed along with 21 earthen pots. One hundred and fifty feet away from the burial site, archaeologists also dug up a habitation site of the same period and found a compact floor, mud walls, and holes for fence posts. According to Pandey, the discovery is important because this is the first time evidence of a late Indus Civilization habitation was found so far east 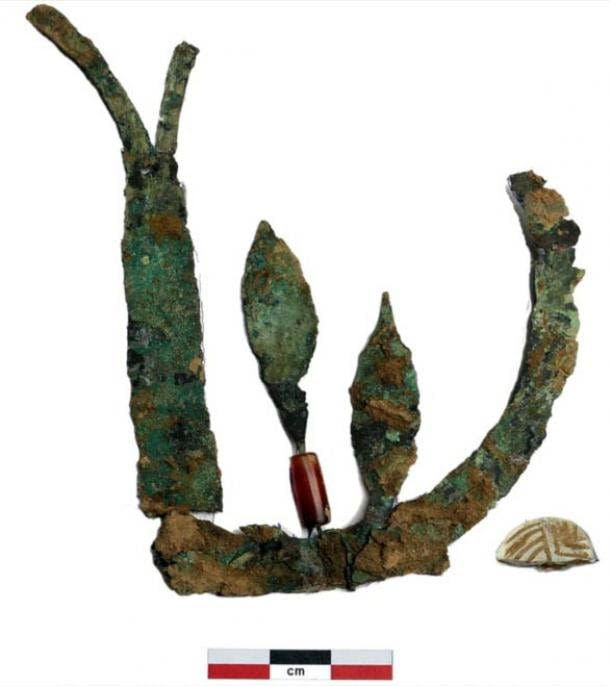 The remnants of a 4,000-year-old copper crown found on a skull from the late Indus Valley civilization period found at village of Chandayan, in the northern Indian state of Uttar Pradesh. (A.K. Pandey/Archaeological Survey of India).
Yog
UPDATE:13.1.2015
I also found this related data.
4,000-year-old house found at Baghpat village offers rare clue to Harappan habitation
MEERUT: Here's something for history buffs to get excited about. The Archaeological Survey of India (ASI), in excavations carried out at Chandyan village in Baghpat, have found remnants of a house that corresponds to the late Harappan period. The discovery is important since, according to archaeologists, this is the first time evidence of habitation pertaining to that period has been found in the Upper Doab region between Ganga and Yamuna.
The late Harappan phase pertains to the period starting around 1900-1800 BC when the Indus Valley Civilization, popularly known as the Harappan Culture, began to decline. The civilization, which is known for its superior urban planning, is believed to have flourished in the period between 3300 BC to 1300 BC in what is today Pakistan, northwest India and parts of Afghanistan and Balochistan.
Earlier in August, a human skull with a copper crown corresponding to the late Harappan period, was accidentally discovered at a brick kiln site in the village. The ASI started excavating the area on November 27 and found, to its delight, a number of items that pertained to the 4,000-yr-old era. "Till date, we have excavated around 20 burial pots, a pelvic bone of the same man whose skull we had found with a copper crown and a few beads like carnelian, faience and agate. However, the most interesting development, undoubtedly, is the evidence of habitation which was found for the first time. We excavated a mud wall with post holes where wooden pillars were probably fixed to support thatched roofs. We also found multi-level foundations that supported structures in different times," said AK Pandey, superintending archaeologist, ASI.
Yog.
Posted by Nirjhar007 at 20:08