Evidence for Patterns of Selective Urban Migration in the Greater Indus Valley (2600-1900 BC): A Lead and Strontium Isotope Mortuary Analysis


Just as modern nation-states struggle to manage the cultural and economic impacts of migration, ancient civilizations dealt with similar external pressures and set policies to regulate people’s movements. In one of the earliest urban societies, the Indus Civilization, mechanisms linking city populations to hinterland groups remain enigmatic in the absence of written documents. However, isotopic data from human tooth enamel associated with Harappa Phase (2600-1900 BC) cemetery burials at Harappa (Pakistan) and Farmana (India) provide individual biogeochemical life histories of migration. Strontium and lead isotope ratios allow us to reinterpret the Indus tradition of cemetery inhumation as part of a specific and highly regulated institution of migration. Intra-individual isotopic shifts are consistent with immigration from resource-rich hinterlands during childhood. Furthermore, mortuary populations formed over hundreds of years and composed almost entirely of first-generation immigrants suggest that inhumation was the final step in a process linking certain urban Indus communities to diverse hinterland groups. Additional multi disciplinary analyses are warranted to confirm inferred patterns of Indus mobility, but the available isotopic data suggest that efforts to classify and regulate human movement in the ancient Indus region likely helped structure socioeconomic integration across an ethnically diverse landscape. 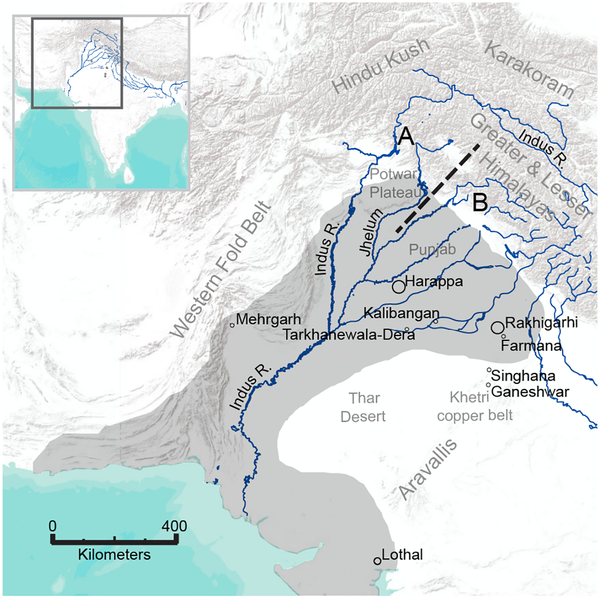 From The Conclusion-
A consideration of the isotopic data and their bioarchaeological context allows certain inferences to be made about the proposed Indus institution. Isotopic [12] and osteological [13] distinctions between males and females at Harappa and the timing of migration at Farmana suggest certain hinterland individuals from distinct genetic populations took up residence with new corporate groups at a very young age. The inclusion of modest burial wealth may indicate they were treated with respect by local groups, whereas sex-based distinctions in provenience suggest migrants were selected according to the preferences of their natal groups rather than the whims of Indus urbanites. Thus the Indus institution of immigration was integrative, accommodating various ethnic or cultural groups within a standardized set of practices reserved exclusively for a class of first generation immigrant. Furthermore, the scarcity of cemetery inhumations and their potential association with resource-rich regions suggests the institution may have been limited in scope to the economic interests of specific mercantile groups rather than all segments of society. Ethnography from the nearby Hindu Kush Range suggests one possible analogy for the Indus institution. Asymmetric systems of fosterage employed by fractious historical kingdoms to build hierarchical political alliances [86] may be broadly comparable to Indus practices, such that fostered individuals literally embodied the relationships between urban and hinterland groups. Whether or not this particular model is borne out by additional multi-disciplinary analyses, however, our isotopic inferences of migration define key parameters in any future investigation of Indus Civilization inter regional interaction.
Yog.
Some Related News-